This is the third of our three-part feature on the 30th anniversary of acid house and the origins of rave culture.

It’s easy to look around right now and think that the world has officially gone mad. Forget Disraeli’s lies, damned lies and statistics, we barely remember what simple algebra is. We seem to be in the age of lies, fake news and Instagram. And Brexit, Trump, extremism, suicide bombings, climate change, the rise of the robots, the fall of man – its chaos out there and it’s getting harder to know which way to turn.

Although a breakdown of order is quite unsettling, it is often necessary to make way for new things to establish themselves where previously they had no room to grow. There is a word used in anthropology to describe the ambiguous state that occurs in rites when participants stand at the threshold between their previous and future state – liminality. Although finding yourself in a liminal phase is not an enviable situation, as you are neither here nor there, and don’t know what is waiting for you on the other side, it is a temporary state, no matter how drawn out it may feel, that heralds the new.

In politics, a discontinuity or gap in a government, organisation or social order is referred to as an interregnum. Interregnum conjures up a similar image of catastrophe and chaos, but history tells us that these moments of chaos often become moments of inflection too. If we look back at the 80s, the world had quite nearly ended in a Cold War deadlock between the two world superpowers, Eastern Europe was gripped by the stronghold of communist regimes, Africa was still fighting apartheid and China ended the decade with a brutal suppression of democracy in the bloody massacre of Tiananmen Square. 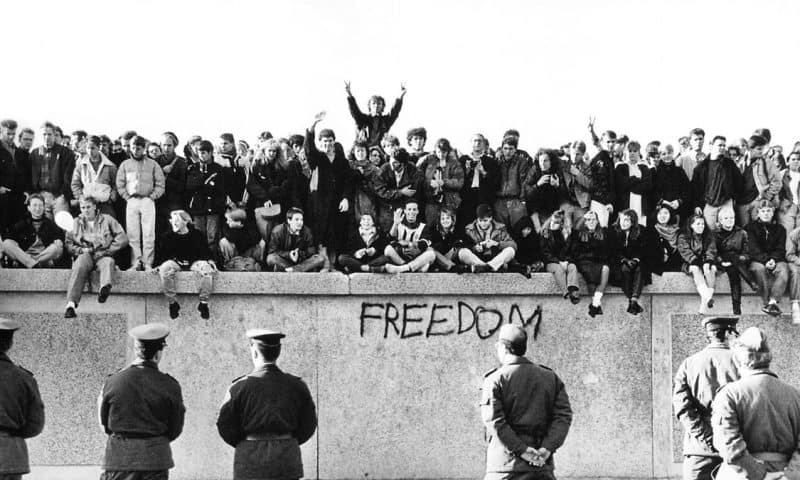 But the geopolitical events of 1989-93 seemed to herald a new social order, starting with the fall of the Berlin Wall in 1989 which triggered the overthrow of the Soviet Union and consequently, the end of the Cold War. Nelson Mandela was released in 1990 and the end of apartheid was announced in 1994. And back here in Europe, out of the struggle and strife of a very dark decade flourished not just the UK acid house movement but another cultural youth movement that has been just as fundamental in shaping the development of electronic music: the Berlin techno movement.

During the Cold War, Germany had seen itself divided between the Allies in the west and the Soviets in the east. Nowhere was this more starkly felt than in Berlin, where for 27 long, dark years, a 103 mile wall cut the city in half. Techno music from Detroit had existed on both sides of the wall, but as young Berliners sought to bridge the physical and ideological divides that had separated them, it’s futuristic, industrial sound suddenly became the perfect soundtrack for a new era post-1989.

“Techno brought the East and West together before reunification did,” argues Feliz Denk, “as people from either side built a new party scene together in the ruins of the partition”. Newly-deserted aircraft hangars, bunkers and factories provided the perfect backdrop for a flourishing rave scene. Parties that stretched out long into the next day were fuelled by a hungry desire to seize the freedoms that for so long had been denied, nothing affording a more liberating feeling that dancing on territory where months before you may have lost your life. The sense of urgency to seize and to live was exacerbated by the knowledge that tomorrow would not bear any trace of that which was lived tonight, as ephemeral dance floors would flourish and then disappear, each time bubbling up in a more obscure location than the last.

“The spaces became the stars of the whole thing,” says Von Thuelen. “It wasn’t about the DJ, at least not at the beginning. It was about all these crazy locations you could find.” As the original techno sound from Detroit spilled into and lapped up these vast spaces, the genre took on new colours, feelings and sounds. East Berliners pushed for a harder electronic sound, this sense of pushing boundaries expressed outwardly through clothes, donning space goggles and moon suits as if to catapult themselves into a newer, brighter future which they were at the forefront of shaping. “People believed new things were going to happen,” explains Westbam, an important pioneer of the scene, “techno music sounded like the future”.

This futuristic space knew no boundaries or judgment, providing a safe haven that embraced everything and everyone, especially the gay community and women. “We belonged together — although some were from the East and some from the West, although some were gay, some were football hooligans, although some were squatters, some were English soldiers or American expats,” Denk says. “It was an incredibly strange mix of people who came to these first parties. But they saw themselves as a family, at least for a certain while.

This sense of unity and freedom through techno was epitomised in the Love Parade, born in 1989 as a political demonstration for peace through love and music. Initiative of the Berlin underground, specifically Matthias Roeingh (Dr Motte), it brought techno out of the bunkers and onto the streets, under the motto Friede, Freude, Eierkuchen (Peace, Joy, Pancakes), which stood for disarmament, music and fair food production. Its ethos and values began to attract people from all across the country, the 150 people from its first year later becoming an uncontrollable 1.5 million in 1997. This was the year that it became clear that it had evolved into a completely different beast, becoming commercialised by capitalism that had defeated the communist system just a decade before. Many of its original pioneers turned their back on the scene and out of the ashes throbbed a new minimalist sound that stood in stark opposition to previous excess.

Although different contexts, there are parallels to be drawn between the Berlin techno movement, the UK acid house movement and Spain’s Ruta de Bacalao. They all beckoned a new era, of new opportunities, new sounds and new ways of viewing the world. They grew out of hardship and repression to become the most important youth movements of the 20th century, driven by young hearts that sought to build brighter futures and come together through the shared experience of music. As Norman J MBE remarked when reflecting on the years before the UK acid house movement, “It was a depressing time actually, but quite a good time as well because it meant that we had to take advantage of that situation to create and carve something for ourselves”.

So how about it? What can we carve out of this chaos? New music for a new era? It’s ours for the making.